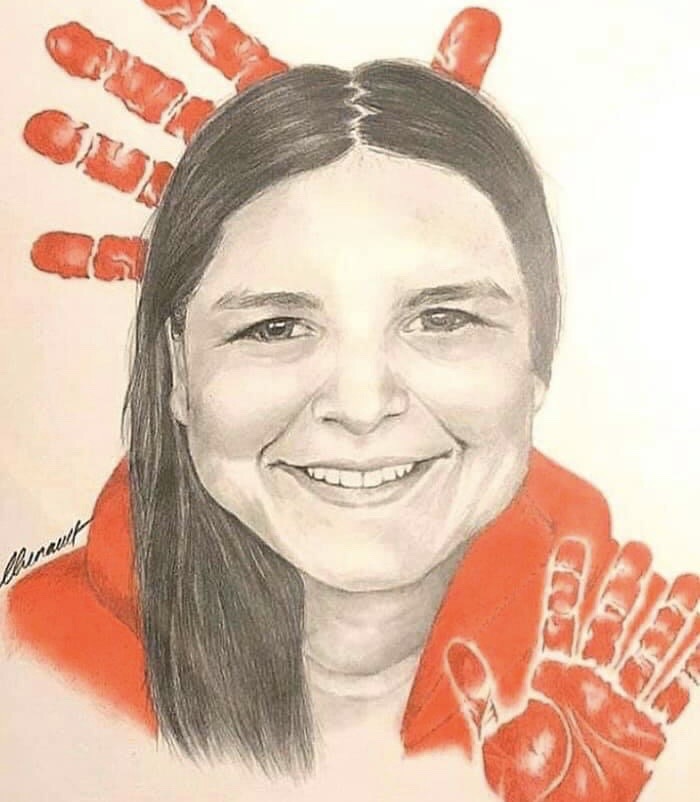 Saskatchewan – Ashley Morin was 31 years old when she disappeared in early July, 2018 from North Battleford, Saskatchewan. Her mother Diane Morin says Ashley always carried a black and green bag with her belongings, but one day the bag was left on Diane’s front step. After several failed attempts to contact Ashley, her family reported her missing.

Ashley was born on March 24, 1987 in North Battleford. She is the youngest of her siblings Janine Morin, 37, and Tyler Morin, 35. According to her mother Diane Morin, Ashley was very involved in sports as a child. She enjoyed soccer, baseball, hockey, and volleyball. “She started playing ball at the age of eight on an all boys team, and she out played the boys on that team,” she says.

Janine claims Ashley’s last long-term relationship ended in 2016, which was very difficult on her. However, in the two years that followed Ashley met new people.

Ashley’s mother Diane says Ashley went to visit her at work on July 1st and the two had a “mother-daughter kind of talk.” This was the last time she spoke to or saw Ashley. Ashley was very close with her family but she was not in touch with them daily.

The family did not know she was actually missing until Ashley’s bag showed up on Diane’s front step one day. “Didn’t matter where she was, what she was doing, she always had that green and black bag,” says Diane.

She claims the green and black bag Ashley carried with her everywhere had all of her personal belongings – like ID’s, cellphone, and bank card. Diane does not know who dropped off the bag, or when, because when it was dropped off – a family member brought it inside the home, not thinking anything of it, and Diane didn’t realize until days later. When she opened the bag and saw all of Ashley’s belongings, she was confused and attempted to reach her.

Ashley did not answer any calls or messages from anyone in the family, so on July 22nd, her sister Janine went into the police station to file a missing persons report. “I was a nervous wreck,” she remembers. “At that moment [the RCMP] did take me seriously, they were actually compassionate in a sense,” says Janine. However, she says that would be the last and only time she felt that way in regards to the RCMP handling her sister’s case.

Ashley was last seen by family on July 10. The night Ashley was reported missing, July 22, Janine and her cousins went to bars to see if they could find her because she liked playing VLTs. they started to reach out to people on social media asking if any of her friends if they had seen her. Diane says even though the missing person report was filed on the 22nd, the first follow-up from police didn’t happen until a week later.

A year after Ashley’s disappearance, police made a press release to ask the public for help in finding a van that Ashley possibly got into. They also indicate they found no mobile phone, social media or bank account activity linked to Morin since.

In the press release, police asked the public to help identify a van or the occupant(s) of a van that Ashley supposedly got into on July 10, 2018 at around 9:30 p.m CST in North Battleford. In the photo, they show an image of a two-tone van (lighter on the top, darker on the bottom), with no windows. Krista Fox, the family spokesperson, says they were not told about the van prior to the press release and ended up finding out through the media.

My relationship with Ashley was very good. We’d always hug each other, tell each other we loved each other. Ashley was really kind-hearted. She didn’t have kids of her own, but when we had family functions for our kids, she’d always come and be that lovable aunt that she could be. She had a big heart. She was always smiling. I have videos of my boy’s 6th birthday and she’s right there… hugging them, joking around with us and she was loveable and she had a good heart. We all miss her.

She was always the one person that I could count on and she would be there. If I called her, if I texted her, and said “sis can you come get me?” she would be right there and she would be like “Yea, I’m on my way”. I have five kids at home and she took them as her own. She loved my kids, and they love her and they miss her every day. It breaks a mom’s heart when you try to console your kids and you try to explain something to them, that their aunt isn’t there.

She meant the world to me, she was like a little sister. We are cousins, sisters, and teammates on and off the ice and soccer field. She was always with me during FSIN tournaments. She was the best aunt to my kids, she always had a beautiful smile and hugs for them. I miss her so much. My kids miss her.

She was very athletic. She played ball from the age of eight, until she was 18. After that she played soccer, volleyball, hockey you name it. Very friendly and outgoing. She started playing ball at the age of eight on an all boys team, and she out played the boys on that team. She was my baby. We went all over with her when she was playing ball. It was me and her with my mom and dad. We travelled to all of her games. She’s my baby. I miss her.

I’m also Ashley’s godmother. It didn’t matter when or what time of the day you saw her, she always hugged and kissed you, she was a very loving girl. She is. I’m not going to say was, I’m not going past tense. She’s my youngest’s brother’s youngest daughter. We’re all very very close. I felt like she’s my daughter too. Doesn’t matter what length of time, or to what extent we have to go, we’ll find her. I promise. I failed her as a godmother, I wasn’t there for her. Mark my word, we’ll find her. If it takes everything I got. She’s just not one of those statistics. Regardless of what people think, we’ll keep searching and we’ll do everything we can to find her. She’s that special to all of us. I love that kid.

I’ve known both families probably since I was a young teenager and I’m in my 50’s now. We live in a community where all our families are quite intertwined or grew up with each other, knew each other. I did know Ash, unfortunately not as close as you hear from her family. Like they said over and over again she had a smile that lit up a room, and I’m very fortunate that I was invited into this family. They’re very near and dear to my heart and they are my family. Each and everyone of them. I will help bring her home that was my promise, and I will not break it and I will do whatever it takes and I don’t care how tired I get, and I don’t care how many days we look, I don’t care how many times we get sent looking I will continue to do it every single day until we bring her home. We’re not giving up. We’re never giving up. We will bring her home.

Krista claims they’ve had to seek resources on their own, such as search assistance. They’ve turned to RCMP in other surrounding communities for help, including Prince Albert, Saskatoon, and Regina. She says whenever they tried to conduct their own searches, they received “zero support” from the North Battleford RCMP. Freda Bird, Ashley’s aunt, says the family was instructed by RCMP to leave ribbons or visible markers on things the family found on their search, like clothing, and that the RCMP would go pick them up when they could. She is not sure if the things were actually retrieved.

Back in March a man named Cory Smockum was found guilty of the attempted murder of Adrienne Lennie, who was friends with Ashley. Lennie testified in a Saskatoon courtroom that Cory told her she would “end up like Ashley Morin.” It is unclear whether Adrienne’s testimony had an impact on the investigation of Ashley’s case.

Ashley’s family and friends follow-up on every tip they receive and have searched endlessly for her. They are offering $20,000 to anyone with information that leads to Ashley’s whereabouts. Ashley Nicole Morin is described as 5’ 2”, 110lbs with dark brown hair.  She was last seen wearing grey sweat pants, a black t-shirt with white writing on it, a black hat and sunglasses.

I reached out to Saskatchewan RCMP Media Relations with many questions regarding Ashley’s case and the handling of her case; however, the response I received back was an email directing me to two press releases from 2019, and the following message: “Saskatchewan RCMP along with the Major Crimes Unit continues to investigate the disappearance of Ashley. Our efforts are focused on determining what happened to Ashley and bringing her home. We will have RCMP members from Indigenous Policing Services attending the walk Friday to support the family.”